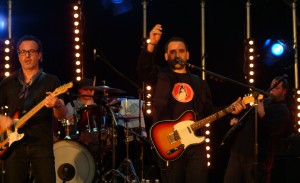 The best original place award comes this year to the band Yeallow who invited the french ethno-pop band Eve-R to play its first part  live at “L’Aubette”, Strasbourg, France.

They began the show by playing “The Map” that rocks more in live than on the album and I like this idea to say “I don’t have the map of your head”  maybe to apologise or to insult. Then “Here Comes” that grooves with electro keyboards, I was surprised that the high voice is sung by Fred , it’s a well composed song that drives to a progressive finish. “If only” has a straight tempo and a nice melody.

There are many children in this place, Yeallow produces new generation of rock fans… In this “glass cave”, the guitars ring great, come over the voices but give an original and interesting sound, a new experience.

I listen “Strange days” in my walkman while walking in the streets and I remember “The Doors”, I like this urban mood and I don’t usually listen to pop rock music even Wilco, Nirvana or Morphine. Oh! They made a surprise by rocking shortly Mickael Jackson’s “Billie Jean”. Great bass sound in “Oversized”.

The audience sings with them Ohohooho on “The Bright Side” (opposite to the Wild Side -Lou Reed ?) new version (EP-One).

“Temptation”, “With From”, “Instead” are played from the first EP which was influenced by the nevrotic newyorker rock somewhere between “The Velvet Underground” and The “Television marquee moon”, good keyboards and tribal drums. “Your perfect existence” gives a great progressive emotion and the back noises make me remember to “Berlin” from “Lou Reed”.

Finally, the girls yeal during the “Yeallow live” like those at the “Beatles”, “Stones” or “Bowie” and that gives me pleasure beacause due to Yeallow they are living Rock n’ roll moments nowadays !

The show ends with “Supergliding”, the bass sounds sometimes like Massive attack’s but drives to a pure rock chorus making a short afterbeat with a tribute the “Bowie’s Space Oddity” 40th birthday.

This live mixed generations, young, middle aged, old people and I think it brought rock n roll spirit for all, in front of  a maintstream techno dance rap culture and for all that I say “Thank you Yeallow”.

(translated from a french blog. JD is a radio and music critic wellkown by his precise musical culture)