To read the full review on MENTIONED REVIEWS: http://www.mentionedreviews.co.uk/yeallow-the-trick-review/ 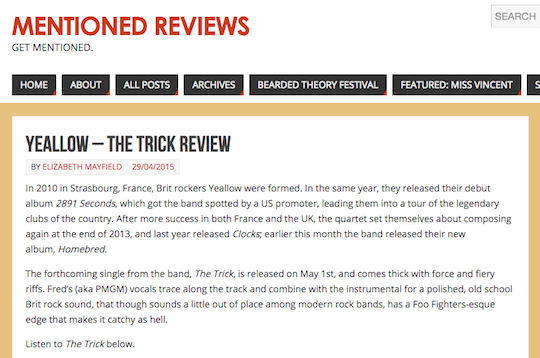 In 2010 in Strasbourg, France, Brit rockers Yeallow were formed. In the same year, they released their debut album 2891 Seconds, which got the band spotted by a US promoter, leading them into a tour of the legendary clubs of the country. After more success in both France and the UK, the quartet set themselves about composing again at the end of 2013, and last year released Clocks; earlier this month the band released their new album, Homebred.

The forthcoming single from the band, The Trick, is released on May 1st, and comes thick with force and fiery riffs. Fred’s (aka PMGM) vocals trace along the track and combine with the instrumental for a polished, old school Brit rock sound, that though sounds a little out of place among modern rock bands, has a Foo Fighters-esque edge that makes it catchy as hell.