To read the full review on LISTEN WITH MONGER: http://listenwithmonger.blogspot.co.uk/2015/05/yeallow-single-review.html 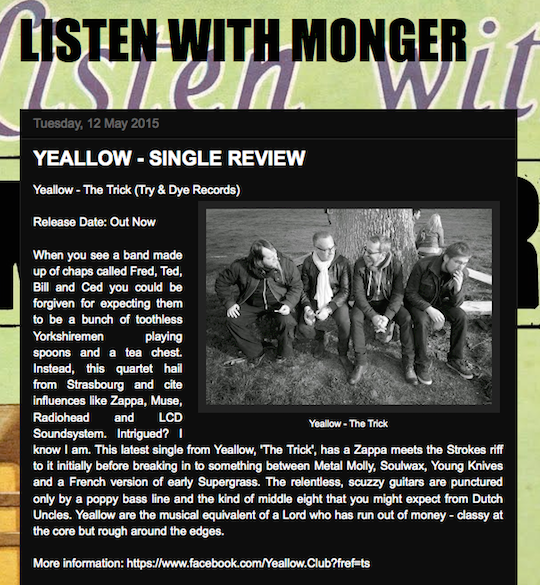 When you see a band made up of chaps called Fred, Ted, Bill and Ced you could be forgiven for expecting them to be a bunch of toothless Yorkshiremen playing spoons and a tea chest. Instead, this quartet hail from Strasbourg and cite influences like Zappa, Muse, Radiohead and LCD Soundsystem. Intrigued? I know I am. This latest single from Yeallow, ‘The Trick’, has a Zappa meets the Strokes riff to it initially before breaking in to something between Metal Molly, Soulwax, Young Knives and a French version of early Supergrass. The relentless, scuzzy guitars are punctured only by a poppy bass line and the kind of middle eight that you might expect from Dutch Uncles. Yeallow are the musical equivalent of a Lord who has run out of money – classy at the core but rough around the edges.