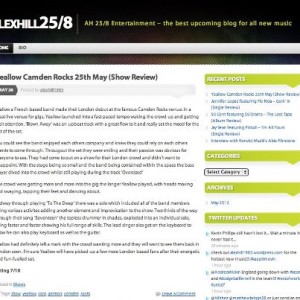 Yeallow a French based band made their London debut at the famous Camden Rocks venue. In a great live venue for gigs, Yeallow launched into a fast paced tempo waking the crowd up and getting their attention. ‘Blown Away’ was an upbeat track with a great flow to it and really set the mood for the rest of the set.

You could see the band enjoyed each others company and knew they could rely on each others talents to come through. Througout the set they were smiling and their passion was obvious for everyone to see. They had come to put on a show for their London crowd and didn’t want to disappoint. With the stage being so small and the band being contained within the space the bass player dived into the crowd whilst still playing during the track ‘Oversized’

The crowd were getting more and more into the gig the longer Yeallow played, with heads moving and swaying, tapping their feet and dancing about.

Midway through playing ‘To The Deep’ there was a solo which included all of the band members doing various activites adding another element and improvisation to the show. Two thirds of the way through their song ‘Seventeen’ the topless drummer in shades, exploded into an individual solo, going faster and faster showing his full range of skills. The lead singer also got on the keyboard to show he can also play keyboard as well as the guitar.

Yeallow had definitely left a mark with the crowd wanting more and they will want to see them back in London soon. I’m sure Yeallow will have picked up a few more London based fans after their energetic and fun-fuelled set.