By mastering its new album in New-York by Jay Franco (Sterling Sound), Yeallow wants clearly to be one of the top band in a rock music but welldone.

When we listen to 2891 Seconds, we enter in the five members’ mixed universe which has analogic and electronic sounds finding some roots near Bowie, Lou Reed and Radiohead.

Let you take away with this original mood during 12 tracks. 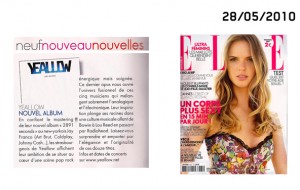