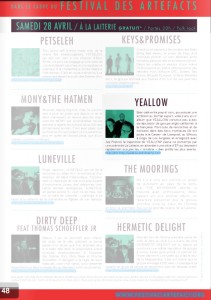 Playing between pop and rock, driven by an international ambition, after  three years and an album, YEALLOW builds its reputation as an English-French-Californian band. Punctuated by meetings and concerts in mythical places (they played at the Cavern in Liverpool, Whisky A Go GO in Los Angeles and recorded with Jay Franco in New-York) the YEALLOW trajectory passes this Spring by the scene from the well-known venue “La Laiterie” during the Artefacts Festival Strasbourg.