To read the full review on THE RINGMASTER REVIEW: https://ringmasterreviewintroduces.wordpress.com/2015/05/03/yeallow-the-trick/ 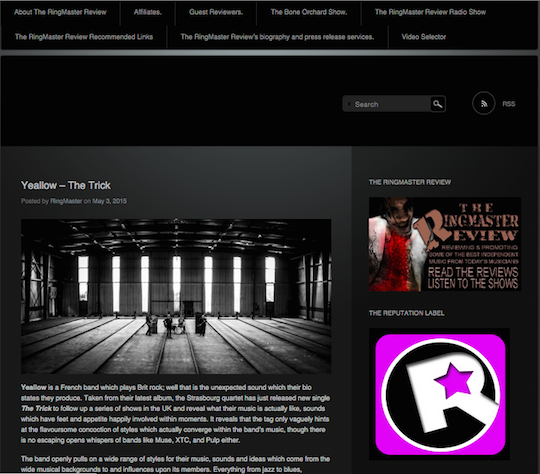 Yeallow is a French band which plays Brit rock; well that is the unexpected sound which their bio states they produce. Taken from their latest album, the Strasbourg quartet has just released new single The Trick to follow up a series of shows in the UK and reveal what their music is actually like, sounds which have feet and appetite happily involved within moments. It reveals that the tag only vaguely hints at the flavoursome concoction of styles which actually converge within the band’s music, though there is no escaping opens whispers of bands like Muse, XTC, and Pulp either.

The band openly pulls on a wide range of styles for their music, sounds and ideas which come from the wide musical backgrounds to and influences upon its members. Everything from jazz to blues, alternative rock to thrash adds spices to the creative pot of four musicians on an adventure “built around a story of strong friendship where the vital need to make music is the common denominator.” The release of Yeallow’s first album 2891 seconds in 2010 quickly lured the attention of a promoter in the US, leading to the band playing a tour of legendary Los Angeles and San Francisco clubs which included venues such as Whisky a go-go and Cat Club. Back in France the band’s stature and success equally rose whilst a tour of the UK in 2012 had British audiences catching on to the band’s sound. It is fair to say that the band has made a widespread impact with a series of tracks/singles across the next couple of years continuing to keep things bubbling, especially the 2014 released Clocks. It is new album Homebred which has ignited the broadest attention yet upon the foursome of Fred aka PMGM (vocals, guitar, keyboards), Ted (guitar, backing vocals), Bill (bass), and Ced (drums), backed by the tour and now The Trick.

Bass and guitars offer an initial drama with their potent entrance before the single quickly settles down into a feisty stride with raw riffs and sharp hooks. The song relaxes into a mellower gait though as the vocals come in, the bass providing a throbbing background to voice and jangling guitar tempting. The track’s scenery is ever evolving though, unpredictable melodies amidst flowing sonic enterprise teasing and sparking the imagination further whilst the rhythmic underbelly of the track never relents in offering low key but constant anthemic bait. Small and engaging crescendos only add to the infectiousness of the song and though it is not an encounter to blow your socks off, it worms under the skin and incites more enjoyment with every listen.

The Trick is a smart and inviting lure into the band and indeed their new album, a temptation ultimately hard to ignore.

The Trick is out now and the album Homebred @ http://yeallow.bandcamp.com/album/homebred