To read the full review on: Raw Ramp 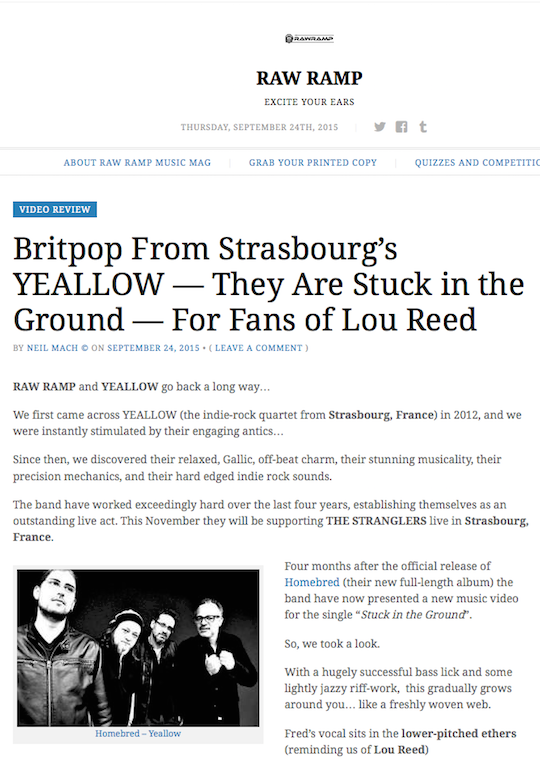 Britpop From Strasbourg’s YEALLOW — They Are Stuck in the Ground — For Fans of Lou Reed
By Neil Mach © on September 24, 2015

RAW RAMP and YEALLOW go back a long way…

We first came across YEALLOW (the indie-rock quartet from Strasbourg, France) in 2012, and we were instantly stimulated by their engaging antics…

Since then, we discovered their relaxed, Gallic, off-beat charm, their stunning musicality, their precision mechanics, and their hard edged indie rock sounds.

The band have worked exceedingly hard over the last four years, establishing themselves as an outstanding live act. This November they will be supporting THE STRANGLERS live in Strasbourg, France.

Four months after the official release of Homebred (their new full-length album) the band have now presented a new music video for the single “Stuck in the Ground”.

With a hugely successful bass lick and some lightly jazzy riff-work, this gradually grows around you… like a freshly woven web.

Not short of experimentation, too erudite to be classed as punk, and too dark to be described as jazz, this is full of originality.

In fact, the art-rock of The Stranglers is the closest comparison we can think of.

When the guitar solo eventually materializes, you get the impression that this could actually be the blues … But so darkened by mood and attitude that it now seems angular…