To read the full review on MUTE PRINT: http://muteprint.com/release-reviews/255/yeallow–homebred-album 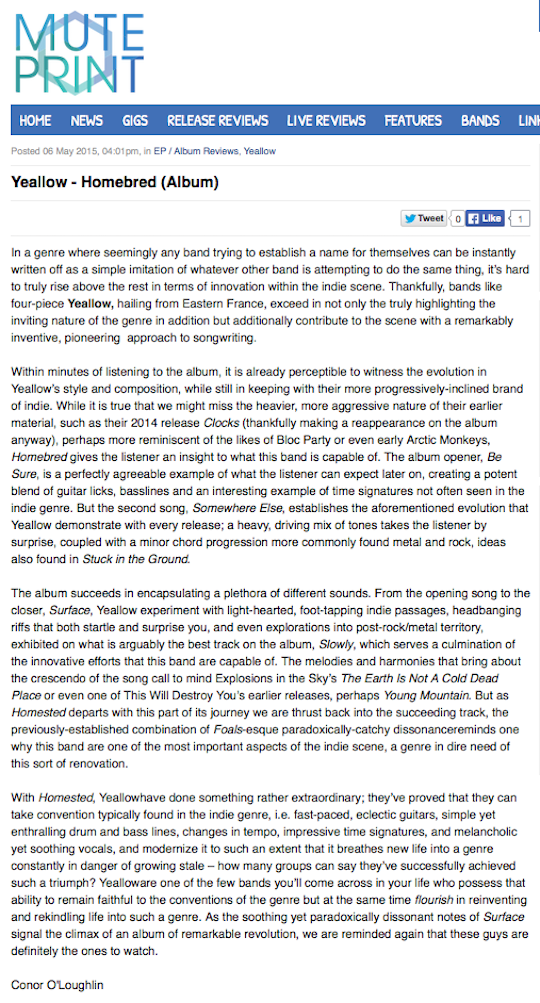 In a genre where seemingly any band trying to establish a name for themselves can be instantly written off as a simple imitation of whatever other band is attempting to do the same thing, it’s hard to truly rise above the rest in terms of innovation within the indie scene. Thankfully, bands like four-piece Yeallow, hailing from Eastern France, exceed in not only the truly highlighting the inviting nature of the genre in addition but additionally contribute to the scene with a remarkably inventive, pioneering approach to songwriting.

Within minutes of listening to the album, it is already perceptible to witness the evolution in Yeallow’s style and composition, while still in keeping with their more progressively-inclined brand of indie. While it is true that we might miss the heavier, more aggressive nature of their earlier material, such as their 2014 release Clocks (thankfully making a reappearance on the album anyway), perhaps more reminiscent of the likes of Bloc Party or even early Arctic Monkeys, Homebred gives the listener an insight to what this band is capable of. The album opener, Be Sure, is a perfectly agreeable example of what the listener can expect later on, creating a potent blend of guitar licks, basslines and an interesting example of time signatures not often seen in the indie genre. But the second song, Somewhere Else, establishes the aforementioned evolution that Yeallow demonstrate with every release; a heavy, driving mix of tones takes the listener by surprise, coupled with a minor chord progression more commonly found metal and rock, ideas also found in Stuck in the Ground.

The album succeeds in encapsulating a plethora of different sounds. From the opening song to the closer, Surface, Yeallow experiment with light-hearted, foot-tapping indie passages, headbanging riffs that both startle and surprise you, and even explorations into post-rock/metal territory, exhibited on what is arguably the best track on the album, Slowly, which serves a culmination of the innovative efforts that this band are capable of. The melodies and harmonies that bring about the crescendo of the song call to mind Explosions in the Sky’s The Earth Is Not A Cold Dead Place or even one of This Will Destroy You’s earlier releases, perhaps Young Mountain. But as Homested departs with this part of its journey we are thrust back into the succeeding track, the previously-established combination of Foals­-esque paradoxically-catchy dissonancereminds one why this band are one of the most important aspects of the indie scene, a genre in dire need of this sort of renovation.

With Homested, Yeallowhave done something rather extraordinary; they’ve proved that they can take convention typically found in the indie genre, i.e. fast-paced, eclectic guitars, simple yet enthralling drum and bass lines, changes in tempo, impressive time signatures, and melancholic yet soothing vocals, and modernize it to such an extent that it breathes new life into a genre constantly in danger of growing stale – how many groups can say they’ve successfully achieved such a triumph? Yealloware one of the few bands you’ll come across in your life who possess that ability to remain faithful to the conventions of the genre but at the same time flourish in reinventing and rekindling life into such a genre. As the soothing yet paradoxically dissonant notes of Surface signal the climax of an album of remarkable revolution, we are reminded again that these guys are definitely the ones to watch.