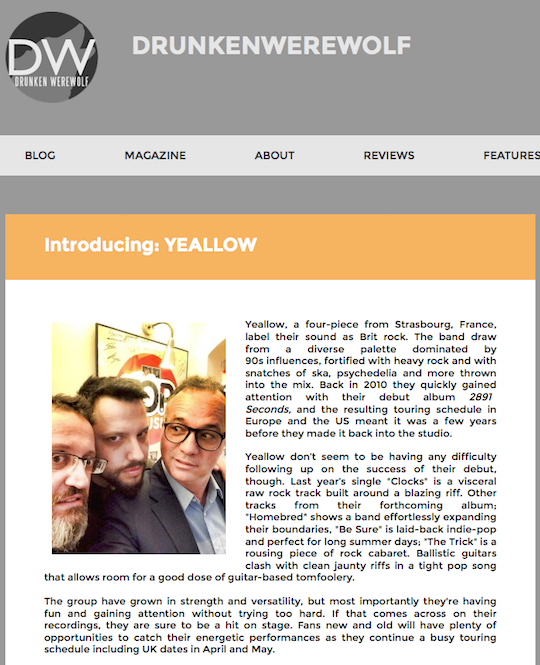 Yeallow, a four-piece from Strasbourg, France, label their sound as Brit rock. The band draw from a diverse palette dominated by 90s influences, fortified with heavy rock and with snatches of ska, psychedelia and more thrown into the mix. Back in 2010 they quickly gained attention with their debut album 2891 Seconds, and the resulting touring schedule in Europe and the US meant it was a few years before they made it back into the studio.

Yeallow don’t seem to be having any difficulty following up on the success of their debut, though. Last year’s single “Clocks” is a visceral raw rock track built around a blazing riff. Other tracks from their forthcoming album; “Homebred” shows a band effortlessly expanding their boundaries, “Be Sure” is laid-back indie-pop and perfect for long summer days; “The Trick” is a rousing piece of rock cabaret. Ballistic guitars clash with clean jaunty riffs in a tight pop song that allows room for a good dose of guitar-based tomfoolery.

The group have grown in strength and versatility, but most importantly they’re having fun and gaining attention without trying too hard. If that comes across on their recordings, they are sure to be a hit on stage. Fans new and old will have plenty of opportunities to catch their energetic performances as they continue a busy touring schedule including UK dates in April and May.