To read the full review on: Angle 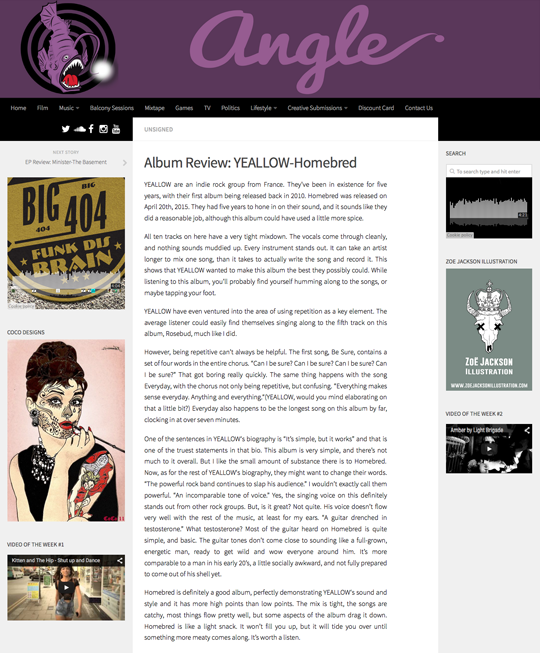 YEALLOW are an indie rock group from France. They’ve been in existence for five years, with their first album being released back in 2010. Homebred was released on April 20th, 2015. They had five years to hone in on their sound, and it sounds like they did a reasonable job, although this album could have used a little more spice.

All ten tracks on here have a very tight mixdown. The vocals come through cleanly, and nothing sounds muddied up. Every instrument stands out. It can take an artist longer to mix one song, than it takes to actually write the song and record it. This shows that YEALLOW wanted to make this album the best they possibly could. While listening to this album, you’ll probably find yourself humming along to the songs, or maybe tapping your foot.

YEALLOW have even ventured into the area of using repetition as a key element. The average listener could easily find themselves singing along to the fifth track on this album, Rosebud, much like I did.

One of the sentences in YEALLOW‘s biography is “It’s simple, but it works” and that is one of the truest statements in that bio. This album is very simple, and there’s not much to it overall. But I like the small amount of substance there is to Homebred. Now, as for the rest of YEALLOW‘s biography, they might want to change their words. “The powerful rock band continues to slap his audience.” I wouldn’t exactly call them powerful. “An incomparable tone of voice.” Yes, the singing voice on this definitely stands out from other rock groups. But, is it great? Not quite. His voice doesn’t flow very well with the rest of the music, at least for my ears. “A guitar drenched in testosterone.” What testosterone? Most of the guitar heard on Homebred is quite simple, and basic. The guitar tones don’t come close to sounding like a full-grown, energetic man, ready to get wild and wow everyone around him. It’s more comparable to a man in his early 20’s, a little socially awkward, and not fully prepared to come out of his shell yet.

Homebred is definitely a good album, perfectly demonstrating YEALLOW‘s sound and style and it has more high points than low points. The mix is tight, the songs are catchy, most things flow pretty well, but some aspects of the album drag it down. Homebred is like a light snack. It won’t fill you up, but it will tide you over until something more meaty comes along. It’s worth a listen.