Strasbourg gave us, in the past and more newly, of bands such Kat Onoma, for the first option, and Crocodiles for second, each in its own style.

Yeallow registers in it,  in a more conventional schema, but makes also proof of address in composition of one pop-rock which goes of the energetic (“Strange days”) to the most ingratiating (“Keep that morning feeling”), through at this beginning of album by a nice series of mid-tempi tied up well, following with an “Oversized” that remembers me The Stranglers with a good voice added with fine electric effects.

They touch lightly even the class of Rodolphe Burger and its acolytes the time of “Here Comes” whom I would have as my part seen well on “Cupid”, superb midnight blue album of Philippe Poirier and Co, or of  “The Map”, in significant linked voices.

The start is of good manners (“After tomorrow”, made by refined and acidulous pop) and Yeallow, if it is hardly surprising, develops numerous good ideas, by being furthermore held in a certain simplicity in its compositions, expanded with correctness, without wrong additions.

We like ” If only “, for example, its low podgy and the fine guitars, or ” What will you do? “, endowed with solid melodies which supports hard riffs, and the whole is well held, wobbling only across a parallel style defect of which is to be already very played.

Yeallow puts right it by showing a laudable and measured eclecticism, devoting himself on “Supergliding” to a power-pop in ringing guitars of the nicest effect. “Call it desire” develops even a noisy, jerky woof, which supplements and gives energy to the panel of the guys from Alsace, before “Raindrops” makes a good melting of acoustic and electric guitars. The voice gives there really added strenghs.

Finally, it is “Your perfect existence”, put down, piano-voice at first then more mucked up, strong of a coating almost shoegaze, that puts an end, with elegance and in a relating torment, in a good album, without weaknesses nor swagger.

A band to be therefore followed, by waiting for lightly more individual and such a successful suite.

Written by  “A good day for a trip” (translation) 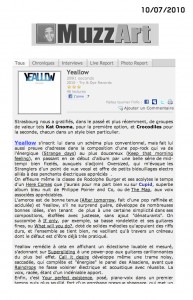